Home
Houses
Samos
Surroundings
walking
Agios Konstandinos
Ambelos
Ano Agios
Kokkari
Lazarus
Manolates
Megallo Seitani
Moni Vronda
Nightingale valley
Pnaka
Pythagorion
Stavrinides
Vourliotes
Booking
Wellness
prices
email
Links
imprint
privacy policy
Walk to Megalo Seitani:
a strenuous walk alongside the coast to one of the most beautiful beaches of Samos : Megalo Seitani (the great devil), where you will only meet fellow walkers. From Potami to Megalo Seitani This is a route you can walk in two different ways. There is a high and a low road. Most people take the low road both back and forth. It is actually nicer to take the high road to get to Megalo Seitani and take the low road back. Park your car or scooter where the low road begins, so that you don’t have to walk the endless country road at the end of the day. To reach that point you drive past Potami beach and climb up to the country road that you follow until you see a large red and yellow arrow painted on a stone : that is the beginning of the low road. There might be a sign but the last time it had been was destroyed. Instead of going to the right walk further along the country road until you come to a Y-junction, of which the left part of the Y is a dead end road. At that point the trail starts. On the right is a dirt road that the farmers made. This path is well marked with red and yellow dots. If you don’t see any dots, go back to the last dot you have seen and look carefully for the pursuit of the trail. See it as an old fashioned quest ! The route is marked very well, so you should succeed! Follow the dots until you reach the end of the dirt road. Walk straight ahead and pick up the trail again. The path stays more or less on the same level and eventually you reach a large open space in an olivegrove and there you turn left at a junction on a path that ascends steeply. At the end of the climb you reach a dirt road that was made by the farmers of Kosmadeï. Turn right there. Somewhat later that dirt road joins another dirt road, where you also turn right. A little later the dirt road bends to the left : on the right handside of that bend two trails begin: one leading to Kosmadeï going more of less in a straight direction seen from the perspective of the dirt road, and the other leading to Megalo Seitani going to the right through the olivegrove. This is a very important point ! Don’t miss it otherwise you'll go all the way up to Kosmadeï ! The path through the olivegrove is marked by red dots on the olive trees. At the end of the olivegrove the trail becomes somewhat unclear but carry on walking straight ahead until you descend to a dry river bed. The path climbs again and descends again to another dry bed and climbs up again. When you arrive at an open olivegrove turn left at a Y-junction. The path climbs further up and is partly overgrown and is parallel to the totally overgrown path further on through the meadow. After you reach the top, the path is horizontal and leads through an olivegrove with on the left hand side a small house. Near an old source, situated on a lower level and an old house somewhat further on, you walk straight ahead on a rather indistinct path, which leads straight upwards. You'll reach a concrete road where you turn right. On the left hand side there is a water reservoir. Where the concrete road bends to the right, walk straight on a path that descends quickly with lots of loose stones. Sometimes the path is somewhat overgrown but keep descending till you reach to end of a dirt road where you see two arrows on a tree pointing to the left. Follow this direction and you'll find yourself almost immediately back on the original trail that at first quite flat but later descends until you reach a T-junction (at that point you have reached the low road) where you turn left. After a while you'll see the beach ahead of you in all its glory. Walk straight ahead until you reach the beach and take a refreshing swim in the sea to wash away all your perspiration from your walk. From Megalo Seitani to Potami Leave the beach walking to the east and pick up the trail that begins on the right hand side of an oleander bush ( in the same direction that you came from). At first the path is flat, later on it meanders up higher to the point where the path to Kosmadï turns to the right. Walk straight ahead on a path that stays more or less on the same level, parallel to the coast. The path is well marked and many people use it so losing your way is almost impossible. However, if you do, go back to the last dot that you saw and pick up the trail again. Now remember to look to left as the scenery is quite breath-taking with beautiful views of the rocky coast. After a while you'll reach Mikro Seitani where it is not so easy to swim because of the rocks that go all the way to the beach. Walk across the beach and climb up and follow the trail until you reach the end of the path and you'll arrive at the country road where left your car or scooter. 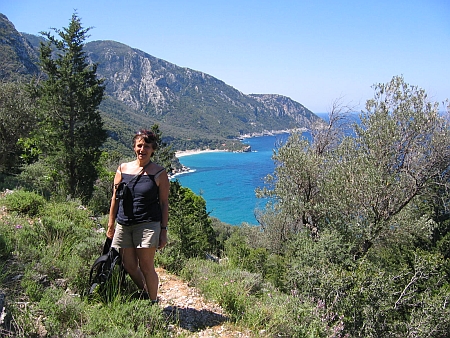 A view from the walk to Megalo Seitani and one of the many orchids you can find there: 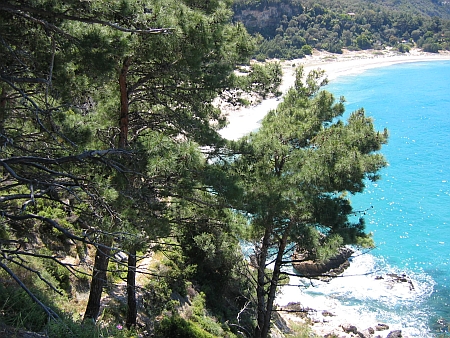 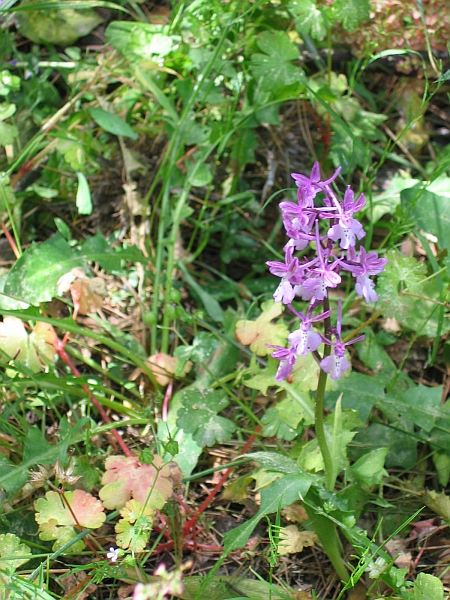